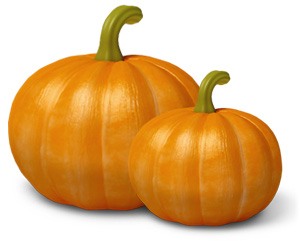 Pumpkin: It’s yummy and it’s seasonal. And we’re in the middle of a full-on flavor takeover. There’s pumpkin in your bagels, beer and coffee. Starbucks has sold more than 200 million Pumpkin Spice Lattes in the past 10 years. Even the makers of Pringles are getting in on the action. While most pumpkin-flavored treats should be added to the once-in-a-while list, pumpkin itself (not to be confused with artificial pumpkin spice flavoring) is actually one of the healthier foods of the season. Here are six reasons it’s OK to be totally obsessed with this season’s superfood.

Pumpkin seeds pack about 1.7 grams of dietary fiber per ounce, while mashed pumpkin has only 50 calories per cup and 3 grams of fiber. “Fiber helps keep you fuller longer, which keeps your appetite at bay so you eat less overall,” says nutrition and fitness expert JJ Virgin.

A cup of cubed pumpkin contains almost twice the recommended daily intake of vitamin A, which promotes good vision, especially in dim light, according to the National Institutes of Health. It has also been found to slow the decline of retinal function in those with retinitis pigmentosa, a degenerative eye disease that can lead to blindness, according to researchers from Harvard. Bonus: Vitamin A also helps form and maintain healthy skin, teeth and bones.

Pumpkin seed oil is full of phytoestrogens, which research shows are beneficial for preventing hypertension. When researchers fed rats a diet supplement with the oil, they found that it helped lower both systolic and diastolic blood pressure in just 12 weeks.

Pumpkin seeds are rich in tryptophan, the amino acid that contributes to post-Thanksgiving dinner sleepiness, says Virgin. Tryptophan is also responsible for helping the body make serotonin, the feel-good neurotransmitter that helps you relax and unwind. Not only do pumpkin seeds promote better sleep, the serotonin will improve your mood, says Virgin.

Pumpkins—especially the seeds—are rich in beta-carotene and other antioxidants with cancer protective properties, says Virgin. And pumpkin seeds could be especially healthy for men. Researchers in Taiwan found pumpkin seed oil blocked unhealthy prostate growth in male rats. A quarter cup of the seeds also contains about 2.75 mg of zinc (about 17 percent of the recommended daily intake for adults), which contributes to male sexual health. When young men in a Wayne State University study restricted their dietary zinc intake, they had significantly lower levels of testosterone after 20 weeks.

Have a Healthier Heart

That means pumpkin-laced desserts won’t quite cut it. For a healthier way to add pumpkin into your diet, adding pumpkin chunks to a roasted vegetable medley, or sprinkling pumpkin seeds on top of your salad. Feeling even more creative? Try pumpkin puree in place of nut butters as a spread, Virgin suggests. And for an energizing morning smoothie, blend a high-quality protein powder with coconut milk, chia seeds, pureed pumpkin and pumpkin pie spice. Happy fall indeed!

<  The Benefits of Fiber in Your Diet: by Noah Lam