5 Cookout Mistakes That Make You Sick 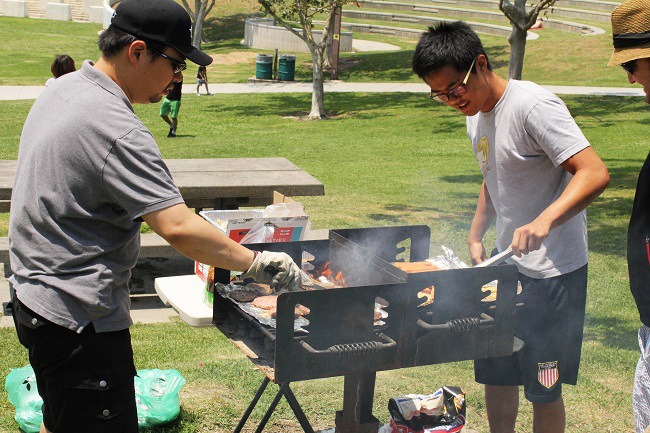 You probably know your chicken shouldn’t be pink when you eat it and to wash your hands after touching raw brats, but you may be making other cookout mistakes that could have your guests leaving with a bit more than just leftovers.

Avoid these five cookout fouls so you—and your family and friends—aren’t stuck hovering over a toilet this summer.

You Wash Your Chicken

A study from University of California-Davis analyzed footage of 120 people prepping food in their kitchens—with almost half washing their chicken in the sink.

It’s a faulty maneuver because not only does that spray the chicken bacteria around to other surfaces in your kitchen, it also doesn’t remove any bacteria from the chicken itself. (Only cooking the bird does that.)

Do This: Marinating your meat in an oil and vinegar mixture with spices and herbs can reduce potential cancer-causing compounds that form on meat during grilling—called heterocyclic amines (HCA)—by nearly 90 percent, according to a study in the Journal of Food Science .

Make sure to marinate in the fridge—letting the chicken soak up sauce on the counter is another recipe for germ growth.

You Get to the Party Late

You probably know you shouldn’t touch mayo-laden items like Uncle Freddy’s famous macaroni salad after it’s been sitting in the sun all day, but you have no problem swiping that last hot dog.

“Yes, that’s most foods,” says Sarah Krieger, MPH, RDN, a spokesperson for the American Academy of Nutrition and Dietetics and a food safety expert.

Do This: Food can sit out for up to two hours, per the USDA guidelines; only one hour if temps are above 90 degrees.

Krieger’s advice: Know when the party begins, and when you arrive look to see if a food is either on a warmer or chilled over ice.

If you’re really late, nuke food turned cold in the microwave. Cold food that’s turned warm is your cue to stick with some chips and beer.

You Don’t Clean the Grill

Super-hot grill temperatures seem like they’d clean the grates of all traces of food, but that’s not the case.

One British study even found that the normal barbecue grill contains 1.7 million microbes per square centimeter. That’s worse than your toilet seat.

“Any food, including leftover food particles on a grill, will spoil. I personally have seen our grill mold after we forgot to clean it after [grilling],” says Krieger.

You Don’t Mind Your Melons

Pre-cut or sliced fruit—the watermelon and cantaloupe you often buy from the grocery store for convenience—is a recipe for germs.

One, knives used to cut the fruit can easily transport bacteria from the rind to the inside if the melons weren’t properly washed beforehand. (And you will have no idea if they were in the store.)

Two, those bacteria multiply if the fruit is kept too warm—anywhere between 40 and 140 degrees.

And you shouldn’t eat cut fruit beyond the sell-buy date, even if it looks okay, says Krieger.

Do This: It’s better to buy whole fruit, slice it yourself, and keep it cold in the fridge or a cooler with ice until you’re ready to eat, says Krieger.

Temps should be colder than 40 degrees, and avoid packing fruit in the same cooler as raw meats. If you’re out at a picnic with no refrigeration or serving fruit outside for over two hours, keep it in a bowl over ice.

Eyeballing the patty for grill marks and brownness isn’t actually an accurate measure of when it’s done, says the USDA.

Ground meat often browns in the fridge, especially if you use previously frozen meat that thawed. That’s why when you cook it, some ground beef looks brown well before it’s at a safe temp, sometimes only at 130 degrees.

Do This: Pack an instant meat thermometer. That same UC-Davis study showed that only half of us have one, and most of us don’t use it anyway.

To kill E.Coli and salmonella, beef patties should be heated to 160 degrees.

Another pro grilling tip: Ditch those tongs you used to place raw meat over the flames when it’s time to flip and serve. Using the same bacteria-laden tongs carries a high risk for cross contamination between raw and cooked food, says Krieger.