Wheezing, sniffling, and snotting can strike at any age, sometimes disappear for a while, then return with a vengeance later in life. So why do you feel lousy one decade, only to have your symptoms ease up the next? 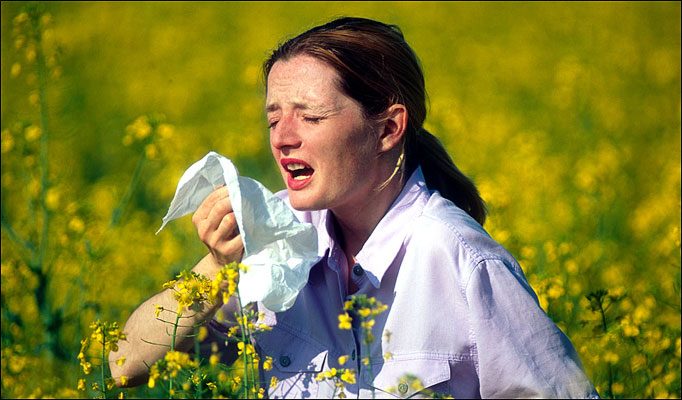 Here’s how hay fever and similar allergic conditions evolve over the course of a lifetime—and what you can do to put them into a more permanent remission.

Why Do You Get Allergies Anyway?

No one’s born with allergies, says Donna Sharpe, M.D., of Duke Otolaryngology in Durham, North Carolina. But mom and dad do pass down a trait called atopy, or the genetic tendency to develop allergies.

If you’re one of the lucky recipients, your first encounter with pollen, animal dander, dust mites, or mold sends your natural defenses into overdrive.

Something in the chemical composition of these allergens—likely an enzyme called a protease—causes your body to perceive them as a threat regardless of whether they actually cause an infection, says David Corry, M.D., chief of allergy, immunology, and rheumatology at Baylor College of Medicine in Houston.

You probably won’t feel any symptoms this first time, but your immune system begins producing a type of antibody called Immunoglobulin E, or IgE, to fight off each alleged invader.

These IgE antibodies lie in wait until the next pollen season or brush with a feline. Then they pounce, triggering symptoms from eczema—an itchy, irritating rash—to snot-soaked, red-eyed hay fever all the way up to life-threatening anaphylaxis.

Your Allergies As a Kid

It takes a somewhat mature immune system—and living through at least one allergy season—for the “perfect storm” that causes allergies to blow through, says Nabeel Farooqui, M.D. an allergy and immunology specialist at Ohio State’s Wexner Medical Center.

Like most people, you probably developed your first symptoms between ages 2 and 18.

Infants and toddlers usually have skin-related symptoms first, Dr. Farooqui says. About 60 percent of kids with eczema will outgrow the condition, but they stand a high chance of sprouting respiratory symptoms and even asthma later.

In fact, about 20 to 30 percent of people with allergic asthma had eczema as a child, according to a study in the Journal of Allergy and Clinical Immunology.

Nasal and other respiratory symptoms can develop any time from age 2 and up. The symptoms often worsen if not properly treated, with smaller amounts of allergens required to trigger the same response, says Adam Wass, M.D., medical director of MemorialCare Medical Group in Costa Mesa, California. That means you’ll need less of the offending allergen to set you off.

Fight back:  Kids can get immunotherapy—shots or lozenges that expose you to increasing doses of allergens until your body stops freaking out over them—as young as age 5 or 6.

Don’t worry if your parents didn’t haul you in then; you can still ask your doctor about the treatment now. Allergy shots not only fight existing allergies, but they also prevent you from having reactions to new allergens you encounter, Dr. Farooqui says.

And don’t forget the more traditional ways to ease your sneezes. Obviously, avoid the things you’re allergic to when you can.

Your Allergies during Your College Years

Many people experience fewer allergy symptoms in young adulthood, Dr. Corry says. A big reason why: Your high-school sweetheart and your innocence aren’t the only thing you leave behind after graduation.

Pollens that have made you sneeze and wheeze your whole life—Southern grasses, trees in the Midwest—may not grow near your college campus. Moving away from a family dog into a pet-free dorm or apartment can also cause your symptoms to wane.

Of course, you can also move somewhere that makes you feel worse, Dr. Sharpe points out.

Head to the Pacific Northwest and you might develop an allergy to alder or birch, while ragweed plagues the Northeast and Midwest—and some studies suggest they are only getting worse due to climate change.

Keep in mind you won’t start feeling new symptoms until after you’ve lived somewhere about a year, since you need multiple exposures for the sensitization process to occur, she says.

Fight back:  Short of choosing a college—or just a new city—by its pollen count, aim to drop that freshman 15.

Extra pounds weigh heavily on your airways, and obesity increases inflammation in your entire body. Both of these factors can worsen symptoms of hay fever and similar conditions, Dr. Farooqui says.

Your Allergies through Your Adult Years

More changes in geography and living situations can revive long-dormant allergies or even spark all-new ones, Dr. Sharpe says.

You’re sleeping with an amazing new woman—and her two cats. You buy that old fixer-upper with a history of mold and cockroach infestations. Or, you move your young family back to your hometown.

Even if you haven’t breathed that particular blend of allergens for years, you’ll likely develop the same old symptoms: “Your body has a good memory,” Dr. Sharpe says, and the specific IgE antibodies to those pollens likely still course through your system.

Fight back : Your best bet is to see your doctor for new allergies or symptoms you can’t control with methods that worked for you in the past. Allergy testing can help you identify exactly what’s triggering your symptoms now, and guide you on how to avoid it.

For instance, if you live in the South and have grass allergies, you should probably ask someone else to mow the lawn or at least wear a mask when you do it, Dr. Corry says.

Your Allergies As You Grow Older

Your immune system produces less IgE with age, so your symptoms may wane.

Still, you’re never too old to develop a new allergy, Dr. Corry says. Snowbirds or people who relocate to warm, subtropical climates later in life can once again expose their immune systems to a whole new blend of potential irritants.

And age-related physiological changes, such as weaker cartilage in your nose, can mean symptoms interfere more with breathing.

Fight back : Even if over-the-counter treatments controlled your sniffles until now, check with your doctor or pharmacist about whether they’re still the best option, especially if you’re on medication for another health problem.

The more meds you take, the more likely you are to have an unwanted side effect or interaction, but having a health professional check how they work together can help prevent this.

Back to Helpful Articles

Snapfish:   60 FREE PRINTS when signing up to Snapfish. Applies to 10x15cm prints