Jell-O Vs. Gelatein: What is the Difference?

Many people have heard of Jell-O as a yummy snack or dessert, but what about Gelatein ? Manufactured by Medtrition, this high-protein alternative to Jell-O is a great nutritional supplement for people with Dysphagia or other swallowing/chewing difficulties. While the two have many similarities, there are some clear factors that differentiate Gelatein from Jell-O. We did a taste test video to evaluate the two. 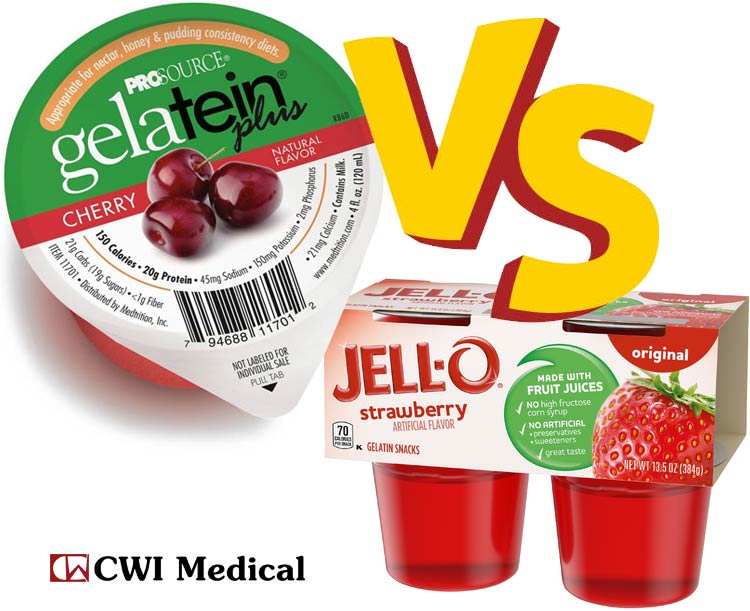 In our analysis, we compared three flavors of Jell-O and Gelatein against one another:

We chose the sugar free and regular variations based on the similarities of flavor profiles. We also noted the caloric information and ingredients of each brand.

First up to the plate was Lemon-Lime Jell-O (Sugar-free) vs. Lemon Gelatein Plus. Upon peeling open the individual cup, our taste tester noticed the lime smell with a hint of lemon. Jell-O is relatively clear and translucent, which makes it a go-to for those who need to be on a clear, liquid diet. The Jell-O was clear, smooth, and “light on the palette,” according to our taste tester. Our tester also noted that while the Jell-O tasted sweet, the aspartame artificial sweetener was not too overwhelming.

He compared this against Lemon Gelatein Plus, which contains whey protein isolate to make a product that is noticeably thicker in its consistency, almost to the point of having a pudding-like substance. Although not as translucent as Jell-O, Gelatein Plus still had a bit of “jiggle,” which our taste tester noted when he did the “jiggle test.” The thicker consistency of Gelatein Plus is due to the product’s intention to add protein to the diet, which is essential for the Dysphagia diet and may be helpful for adults with difficulty swallowing solids or liquids.

Although cloudier in its appearance, Gelatein Plus is still approved for those on a clear liquid diet. Our taste tester noted that Gelatein had less of a lemony taste than its Lemon-Lime Jell-O counterpart.

Next up was Orange Jell-O in the regular (note: not sugar-free) variety. Our tester smelled orange as soon as he opened the lid. Upon tasting the Jell-O, however, he noted just a hint of orange akin to that of a natural orange.

As for the Orange Gelatein 20, this was the sugar-free version. Our tester once again noted the almost pudding-like consistency but also observed that the product smelled more like the Whey Protein Isolate than the intended orange flavor.

Once again, the Cherry Gelatein Plus garnered many of the same reactions as the other flavors. By this time, with it being his third variety, our tester concluded that Gelatein Plus’ consistency was most like an apple sauce with extra thickener.

Both Jell-O and Gelatein have their pros and cons. If you’re looking for nutritional supplementation, Gelatein from Medtrition is the way to go. Our taste tester recommends the Lemon Gelatein Plus flavor as his favorite among all three. Jell-O, on the other hand, may suffice if your goal is a tasty, relatively low-calorie snack.

Watch the video of our taste tester evaluating all six products here ! For additional information, please feel free to contact us today.