The Progression of Alzheimer’s Disease

Alzheimer’s disease is a severe form of dementia, where patients begin to lose their cognitive function starting with their memory. The symptoms of Alzheimer’s develop slowly over the course of time. The symptoms become so severe that they begin to hamper daily life. 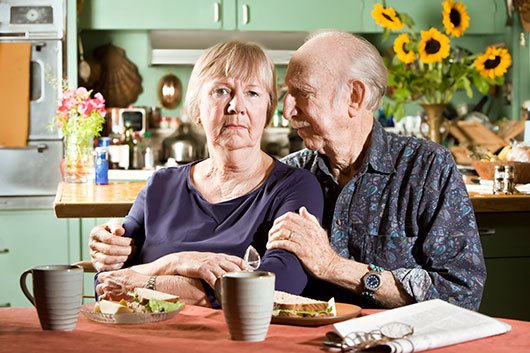 Alzheimer’s is an expansive-term (containing lots of symptoms and stages) and one of the most common forms of dementia, the symptoms of which primarily include gradual loss of memory and other cognitive functions. About 60% to 80% of cases of dementia are Alzheimer's patients. Alzheimer's is not a regular part of the aging process. While the greatest risk of Alzheimer's is known to be aging and the majority of the patients are older than 65, there are about 200,000 patients in the United States that suffer from an early-onset of Alzheimer's from ages younger than 65.

Alzheimer’s is known to be a progressive disease. The symptoms of dementia associated with the disease get worse over the span of years. The memory loss is mild during the early stages of the disease, but progress to such an extent over the course that it becomes difficult for the patient to remember daily activities or recognize their own family. They become unable to hold a conversation as they lose track and memory of the topic and also find it difficult to interact with the environment as it begins to appear new every time. Alzheimer’s is a life-threatening disease and most patients lose their lives after an average time period of 8 years after the appearance of the symptom. It is the sixth leading cause of death in the United States

Understanding Dementia and Signs of Alzheimer’s

Strictly speaking, dementia is not a disease. It is an overarching word which is used to describe a whole host of symptoms related to cognitive functions such as memory and thinking skills to such an extent that the patient is unable to perform even the most basic daily activities. After Alzheimer's Vascular Dementia is the most common form of dementia and it happens after a stroke. There are many other kinds of minor dementia that are reversible such as those caused by thyroid problems and certain vitamin deficiencies.

While this disease has various stages of dementia associated with it, there are certain early signs and symptoms of the disease that one should be aware of. Mentioned below are some of the early signs of Alzheimer’s.

The home environments for Alzheimer's patients need to be redesigned in a fashion that is absolutely stress and has information and support for moving around and navigation. Added to this, certain space must be reserved in every room for resting. Be it a sofa or a small bed, Alzheimer's patients find it difficult to move around on their own and the experience can be quite exhausting. Added to this, special attention is to be paid about safety and removing dangerous objects and obstacles from their access or path. Mentioned below are some critical points that one should note while preparing homes for Alzheimer’s Patients.

Added to this, there are various kinds of home care products that Alzheimer's patients can be equipped with in order to make their lives easier. For patients with early onset of the disease, there are numerous cognitive aids, such as voice aided instruction apps and various other kinds of electronic devices that help in planning and visualizing. One of the most useful products that an Alzheimer's patient can have is a graduated pill holder which holds their pills according to days and time. Added to this, once the patient has lost the ability to move around or care for themselves at all, various kinds of care products such as special shampoos and body washes , bedpans , portioned plates , special spoons and eating aids , and various products will become essential. The bathroom will need to be equipped with special bath chairs easy to use bathing equipment which makes the entire experience simple and stress-free.